What makes it so special?

Scotland produces two types of Scotch Whisky; Scotch Grain Whisky and Scotch Malt Whisky. There are two principal distinctions between these two types of Scotch: First of all, Scotch Grain Whisky is produced from various cereals, typically wheat, barley, malted barley and sometimes maize (depending to some extent on the prevailing cereal prices), whereas Scotch Malt Whisky must be made solely from malted barley (Hordeum vulgare). Secondly, Scotch Grain Whisky is distilled in a patent still (continuous process) whereas Scotch Malt Whisky is distilled in copper pot stills (batch process). The fundamental differences between patent stills and copper pot stills, and the consequent effect on flavour, will be addressed elsewhere in this series of technical notes. Suffice to say that patent stills tend to produce Scotch Whisky that’s generally smoother and less characterful than the Scotch Malt Whisky that’s distilled in copper pot stills.

The bulk of Scotch Whisky sold worldwide is Blended Scotch Whisky (e.g. Johnnie Walker, Chivas Regal, Bells, Ballantine’s, Famous Grouse, Grants Standfast, etc., etc.). These are typically produced from unique blends of Grain and Malt Scotch Whiskies, formulated by very experienced ‘master blenders’ to deliver the flavour profile that characterises the brand. Most of the Malt Whisky produced in Scotland is used as an ingredient in Blended Scotch Whisky. Back in the 1960s, very little Malt Whisky was sold as Single Malt (the word ‘Single’ indicating that it’s the product of just one distillery). William Grant should be given credit for creating a worldwide market for Single Malts via Glenfiddich Single Malt Scotch Whisky. Today, the global market for Single Malts has become well established and it’s growing in volume, value and kudos. In 2018, Scotch Malt Whisky exports were valued at £1.3 billion, constituting ~27% of total Scotch Whisky exports.

Much of the appeal and interest in Single Malts derives from the fact that there are over 100 Single Malt distilleries in Scotland, each typically producing a number of expressions differing in age and type of maturation cask. This creates a wide selection of sensory profiles for consumers to compare and contrast. There’s also huge interest in the provenance of the individual distilleries.

There’s little doubt that the principal sensory differences between Scotch Grain Whisky and Scotch Malt Whisky derive from the distillation processes rather than the various different type(s) of cereal used in their production. That’s not to say that the compositional differences between barley and other cereals are unimportant in whisky flavour production, but the impact of these cereal-derived differences is modest. It seems much more plausible that the stipulation that Scotch Malt Whisky must be produced solely from malted barley would have been a pragmatic commercial decision intended to create a clear legal distinction between the two types of Scotch Whisky. If this was the case, then those who sought to create this distinction should be congratulated for their foresight in providing a platform from which the burgeoning Single Malt Scotch Whisky category has since developed. However, this doesn’t explain why malted barley is often preferred by beer brewers. Nor does it explain why Scotch, Irish, American and Canadian grain whiskies invariably include a significant proportion of malted barley (which is relatively expensive) in their mash bills.

Surely, there must be another reason!

In nature, barley grains are simply the seeds of barley plants but, from the distiller’s perspective, they’re the source of carbohydrate (starch) from which alcohol is produced. To fully appreciate the ‘specialness’ of barley, it’s important to know something about the structure of barley grains. 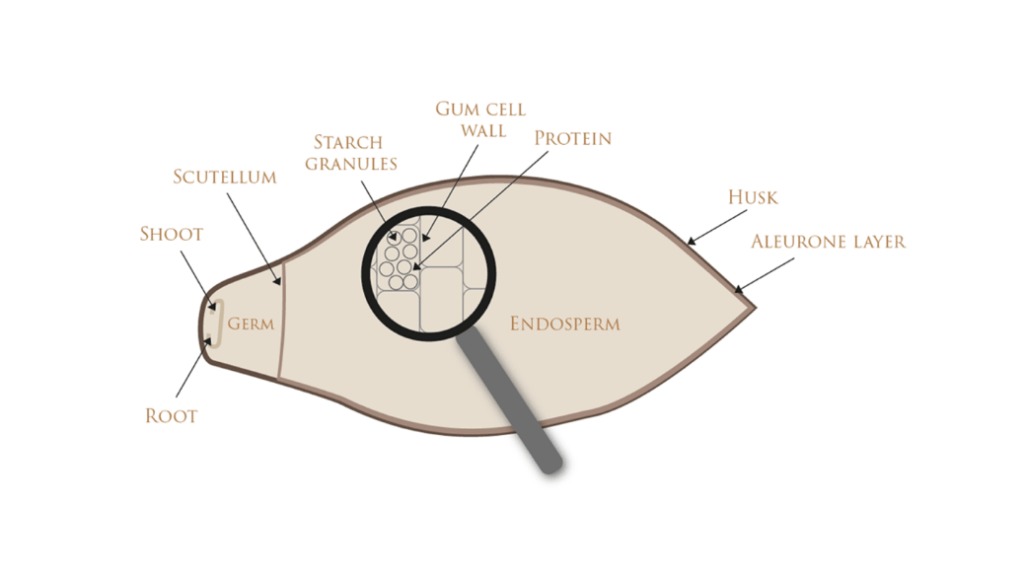 Barley grains comprise 3 principal botanical features: the germ, endosperm and bran. The bran layer is essentially an outer sheath that encloses the grain. It accounts for 10% of the dry weight of the grain and comprises three distinct layers; the husk, pericarp and testa. The husk is a leaf-like structure that’s physiologically external to the grain. Barley is one of only four commercial cereals that retains its husk after harvest (along with rice, oats and millet). The pericarp and testa form an integral part of the grain known as the seed coat.

The germ constitutes about 3% of the dry weight of the barley grain. It is the reproductive part of the seed (i.e. the embryo) that eventually grows into a barley plant after germination.

The endosperm is the starchy food store upon which the developing seedling depends for sustenance, until such time that it can self-nourish via photosynthesis. Endosperm cells contain large and small starch granules, embedded in a protein matrix, all of which is enclosed within a cell wall. The endosperm, which accounts for 75% of the dry weight of the barley grain, comprises mainly starch (85%) and protein (10%). The remaining 5% is mostly cell wall material.

The entire endosperm is enclosed within a membrane-like structure known as the aleurone layer, which comprises 12% of the dry weight of the grain. Whilst in most cultivated cereals (wheat, rye, oats, rice, etc.) the aleurone layer is just one cell thick, in barley it’s multicellular. For reasons that will be explained shortly, it’s the multicellular nature of its aleurone layer that makes barley so very special!

Bearing in mind that it’s sugar rather than starch that’s fermented by yeast into alcohol, the distiller’s challenge (or more correctly, the brewer’s challenge) is to release the starch from within the endosperm cells and then break it down into fermentable sugar. This is a 3-stage process that starts with malting, followed by milling and finally by mashing. The end-product, known as wort, is a golden-brown liquid that’s rich in fermentable sugars and other materials that are essential for making good-quality Single Malt Scotch whisky.

Malting, milling and mashing are dealt with in much greater detail elsewhere in this series of technical notes. Save to say at this stage, that malting is essentially induced and carefully controlled germination of barley seeds. The principal objective of malting is to break down the walls of the endosperm cells and thereafter to release the starch granules therein from the adherent protein matrix in which they’re embedded. This process is known as modification. Mashing is the process whereby starch released from the endosperm cells during malting is broken down into fermentable sugars.

Three principal types of enzyme are involved in malting: Enzymes (largely glucanases and pentosanases) responsible for breaking down the endosperm cell walls, thereby allowing the cell contents (i.e. starch granules embedded in protein) to spill out. Enzymes (known as endo-proteases) that break down the endosperm cell proteins thereby exposing the starch granules to the third type of enzyme (known as amylolytic enzymes) that ultimately break down starch molecules into fermentable sugars (largely maltose).

The ‘trick’ with malting is to allow the process to continue to the point where cell wall and protein matrix break down (modification) is optimal and amylolytic enzyme potential is maximised, whilst conversion of starch into sugar (and subsequent consumption of sugar by the growing seedling) is minimal. Malting is arrested by drying the germinating barley in a malt kiln. At the end of the malting process, only about 10% of the starch should have been converted into sugar but this is enough to make the malted barley grains taste slightly sweet.

Stopping the malting process at exactly the right point requires a huge amount of skill and experience. If it’s stopped too soon, modification will be incomplete, and a significant proportion of the starch granules will be inaccessible to the amylolytic enzymes. Too late and conversion of starch into sugar will be too advanced. Either way, the yield of alcohol will be reduced, with all the attendant economic consequences. It’s for this reason that most distillers leave malting to the experts and buy-in their malt from commercial maltsters. Going back to the ‘specialness’ of barley, all three enzyme types mentioned above are either released from or synthesised in the aleurone layer that surrounds the starchy endosperm in all cereal grains. However, in most cereals, the aleurone layer is just one cell thick whereas in barley it’s multicellular. This means that the enzymes required for modification of the endosperm cells and for the subsequent conversion of starch into fermentable sugars, are produced much more rapidly and more proficiently in barley than in other cereals…and it’s this, more than anything else, that makes barley so special!

Including malted barley in the mash bill of grain whiskies means that mashing will be more rapid and more likely to go to completion, with all that this implies for efficiency, yield and cost.